4 Fabulous Staircases that scream ‘look at me!’

What do you think of your staircase? If you’re anything like me, then you only really notice it when you give it a quick vacuum or try to wrap the Christmas garland around it.

But, when visiting a house for a magazine a little while ago, I was reminded that, once upon a time, staircases were designed to be one of the main attention grabbing, ‘just look how wealthy I am’, showpieces of the historical home. 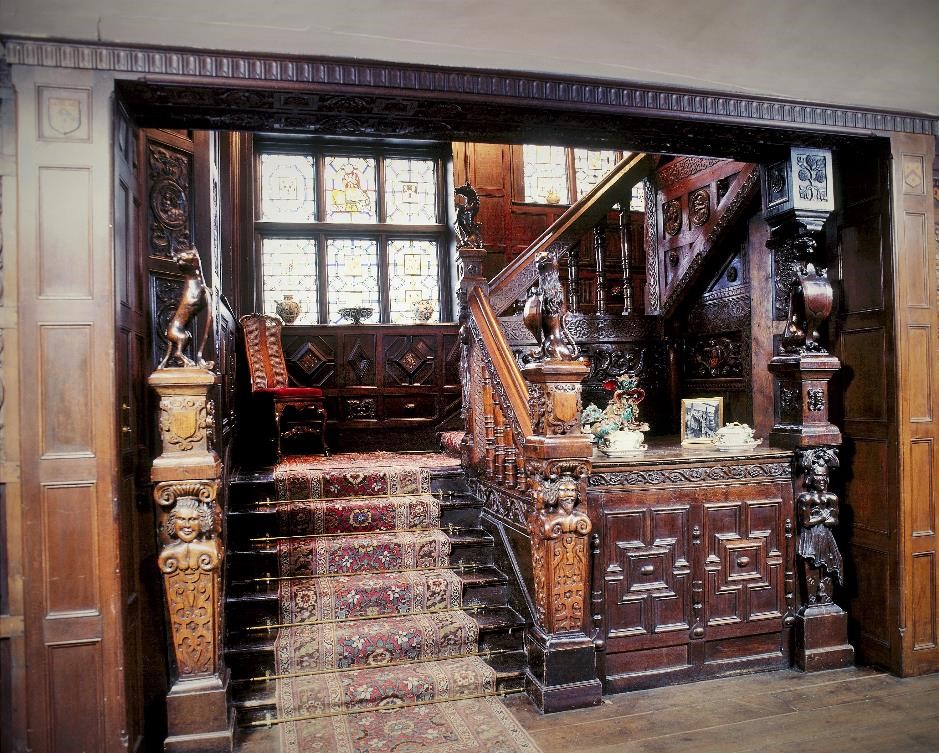 If you want to attract attention, you have to give people something to look at. Captain Nicholas Toke, a very wealthy 17th century merchant and member of the militia, decided that elaborate carvings would be the eye-catching feature of his new staircase at Godinton House in Kent.

It seems that every piece of the chestnut wood is carved or shaped into something amazing. Unfortunately, nothing is known of the craftsman who spent endless hours creating the trailing vines, exotic beasts and domestic animals but their talent is unmistakable.

The three newel posts are shaped as inverted obelisks and decorated with ornamental intertwined line designs known as arabesques. These have then been surmounted by three very strange figures that, despite much speculation, no one has yet determined.

Symbolic animals have also been added. A griffin and greyhound represent the Toke family’s heraldic achievements while a dragon, hornless unicorn and a lion represent Wales, Scotland and England.

The staircase was completed in 1628 and was just one piece of an elaborate renovation that saw the entire eastern side of the house rebuilt. In order to fit the new staircase in, Captain Toke had to reduce the size of the internal courtyard. He deemed the sacrifice worth it, however, as he wanted to impress guests on route to his Great Chamber.

Fancy trying to figure out those unidentifiable carvings for yourself? Then visit www.godintonhouse.co.uk 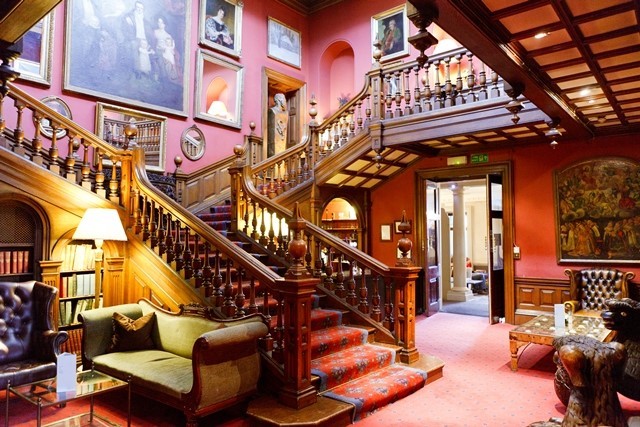 Just a little bit further down the road is Chilston Park.  And its hard to look at this historical staircase without wanting to don a very large ballgown and make a dramatic appearance at the top of the stairs. Fortunately, the country house is now a hotel so guests can do just that if they wish but it would have never have been possible without the influence, and deep pockets, of Thomas Best.

Thomas bought Chilston Park in 1737. At the time he was a rising political star and he went on to be a twice elected MP for Canterbury, Lieutenant-Governor of Dover and Deputy Warden of the Cinque Ports.

As such, he and his wife, Caroline, needed a house to entertain and impress and the now Grade 1 listed building saw many improvements during this ownership.  One of which involved the complete remodelling of the east side of the property to accomodate a staircase hall inspired by the fashion for Chinese Chippendale.

The mid-eighteenth century craze for anything Chinese was largely prompted by the business exploits of the East India Company.  Written and verbal accounts of the exotic architecture, objects and customs seen in the Empire of China quickly spread through the ballrooms and gentleman’s clubs of Britain.

Imported goods, porcelain and silk swiftly followed, making their way into the homes of the wealthy and inspiring architects to incorporate their designs into the local architecture.

Furniture designer and cabinet maker, Thomas Chippendale, was one of the first to catch on to the new trend and in 1754 he published ‘The Gentleman and Cabinet Maker’s Directory’. As the directory included patterns and making instructions is was easy for his designs to spread and this resulted in the term ‘Chinese Chippendale’. 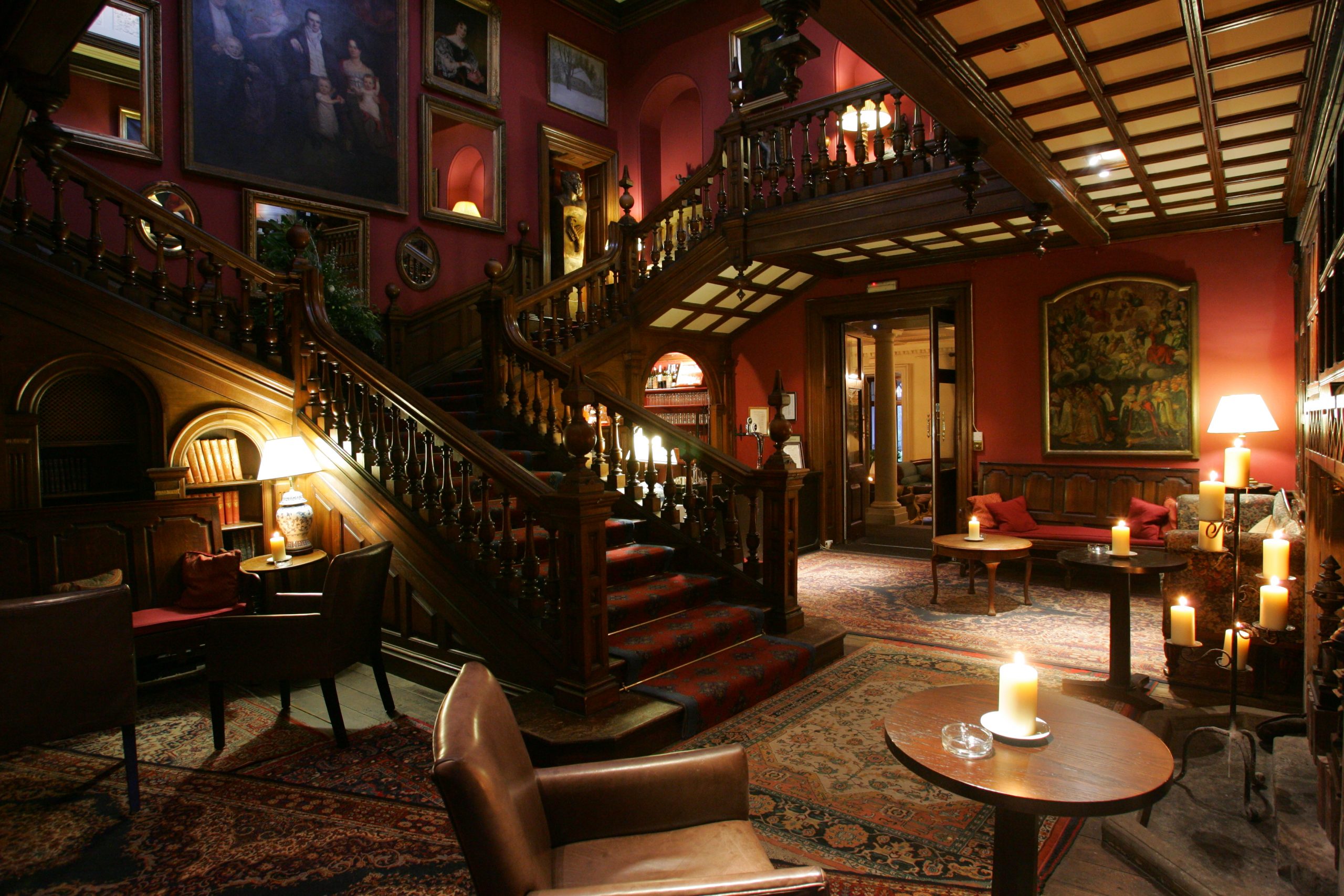 The Chinese Chippendale influence is easy to see within Chilston Park but Thomas Best was not a man to be content with a simple staircase, no matter how ornate.  No, something much grander was called or and he decided to commission an ‘imperial’ staircase with its trademark symetrically divided flights instead.

The lower flights of the stairs are generally wider than the higher, separated flights as, although designed to be visually stunning, the two individual flights are basically a form of traffic control.  When entertaining, guests would only be allowed to ascend or descend in one direction.

It’s easy to see why this type of staircase is sometimes wrongly called a double staircase but to be a true double staircase, you need to have two flights of steps, generally leading from opposite points, that meet at a certain destination such as a front door.

To find out more about the rest of this gorgeous hotel, which serves a fantastic afternoon tea by the way, take a look at www.handpickedhotels.co.uk/chilstonpark.

A Georgian Spiral of Elegance at Danson House, Bexleyheath 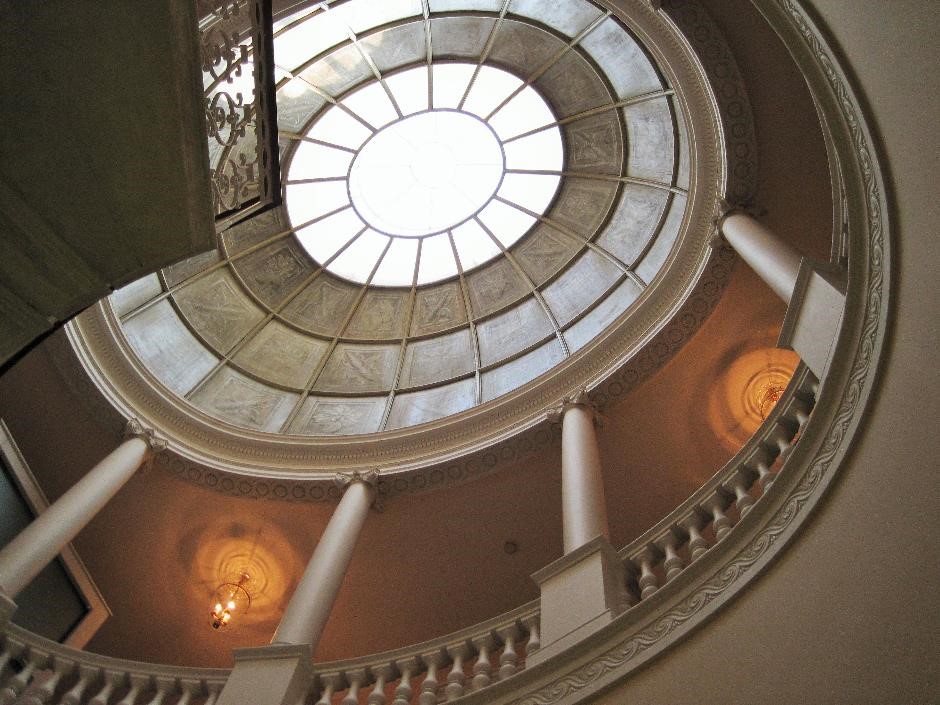 The central elliptical staircase at Danson House, Kent. Image taken by Rachael Hale with the kind permission of Danson House.

Travel closer to London and the light and airy feeling attached to the elliptical staircase at Danson House is hard to ignore. My last visit soon found me laying on the floor trying to capture the curves of this lovely staircase which, due to its architectural structure, seems to be magically suspended in the air.

The staircase owes its existence to, yet another, upwardly mobile gent. This time it was John Boyd, the son of a West Indies sugar cane merchant who wanted to build a home that would demonstrate his classical education and project an image of refinement far deeper than he had claim to.

No expense was spared and John Boyd commissioned Robert Taylor, the architect appointed to the Bank of England until his death in 1788, to realise his dreams. The stunning oval staircase that now stands at the centre of Danson House soars up from the service ground floor area to a surprisingly small number of bedrooms on the upper floor. I say surprisingly because John Boyd had five children by his first wife and three by his second. 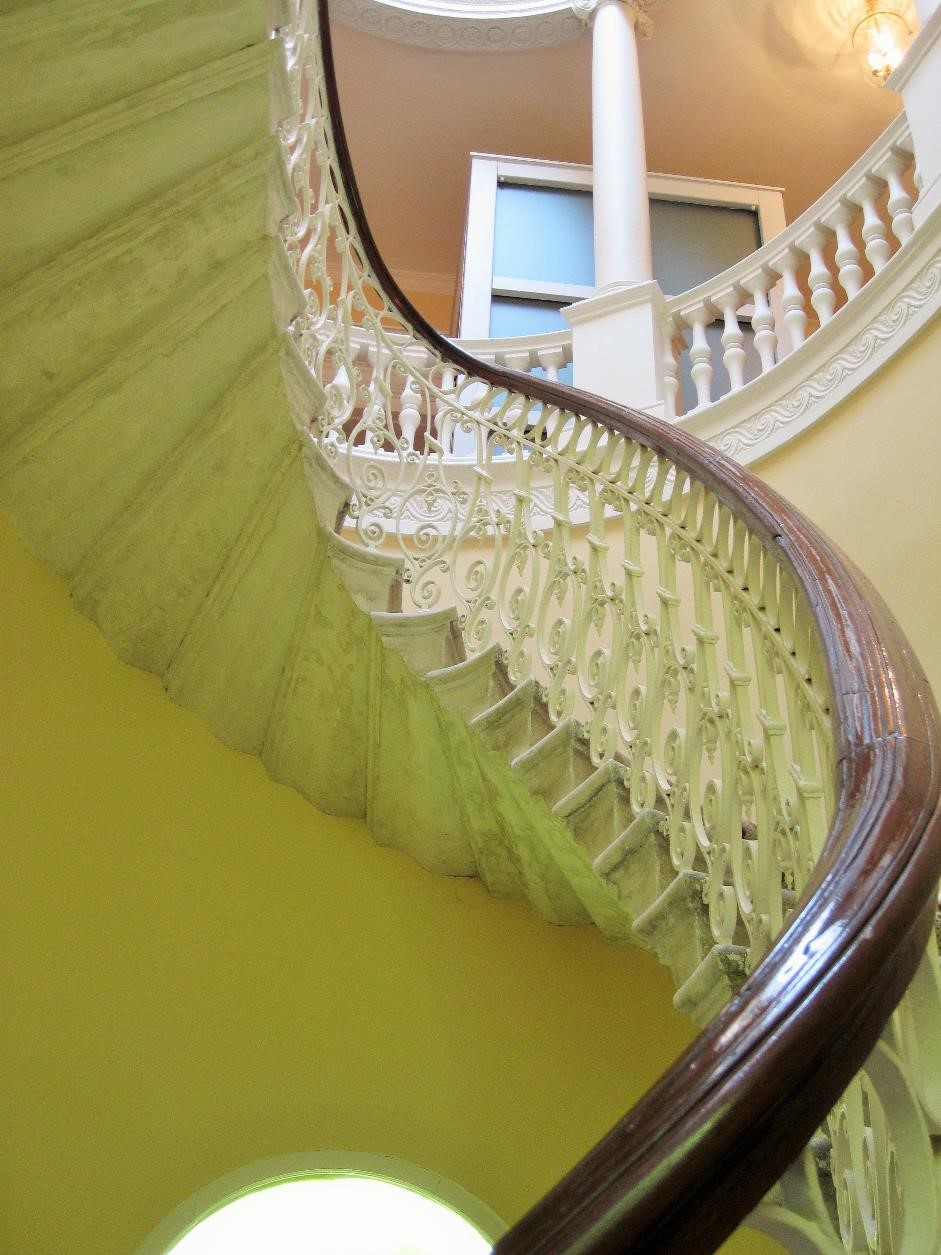 One third of each step is built into the wall so each stone slab is held up only by the weight of the ones above and below it. Creating a staircase of this design takes a lot of skill and therefore expense. A fact that wouldn’t have been lost on John Boyd’s Georgian visitors.

Neither would the wrought iron railing enhancing the edge of the elegant spiral or the beautiful pale coloured Georgian trompe l’oeil, once hidden beneath a layer of duck egg blue paint, adoring what appears to be a stone dome beneath a glass ceiling. In reality, the structure of the house could not support the weight of real stone but the fact that it’s just an illusion doesn’t make the staircase any less ‘wow’ worthy.

The sad reality is that this entire building, like many other historical properties, was nearly lost for good.  In 1995 English Heritage stated that Danson House was the ‘building most at risk’ in London.  Fortunately for us fans of historical buildings, a huge restoration project costing over £4.5 million has since restored the building to its former glory. It now serves as the official Register Office for the London Borough of Bexley. Allowing the staircase to once again take centre state and impress visitors.

To find out more about this grand 18th century manor house visit www.bexley.gov.uk/services/visitor-attractions/danson-house 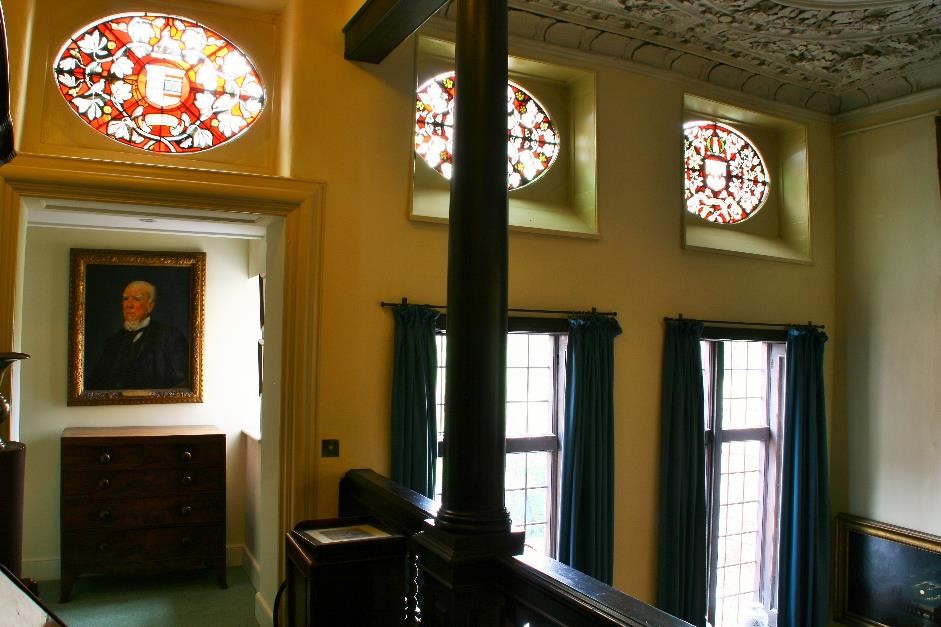 The 17th century staircase at Owletts, former home of Sir Herbert Baker. Image published with the kind permission of the Baker family and the National Trust

My fourth and final staircase, and yes, I know there are far more than four fabulous historical staircases out there to see, is at Owletts in Cobham, Kent.

The dark wooden staircase is far simpler in design than those listed above but it still has the ‘wow’ factor due to the vibrant stained-glass windows and the extraordinary Carolean plasterwork ceiling that hangs above your head.

According to the 1988 version of Owlett’s guidebook, ‘The staircase and hall panelling were originally painted French grey, then grained oak (mustard) to be later covered with dark brown. The Staircase is typical of the period of Charles II with a broad handrail and twisted balusters, built of pitch pine.’

Owletts is the 17th century, grade II listed birthplace of British architect Sir Herbert Baker. During his lifetime, Sir Herbert’s work received great criticism (for his work on the Bank of England) and acclaim. He is, however, responsible for one of the most iconic war cemeteries visited today – Tyne Cot in Belgium.

The stunning Carolean plasterwork ceiling at Owletts. Kindly published with the permission of Owletts and the National Trust.

Sir Herbert also remodelled Owletts before gifting it to the National Trust upon his death in 1946. His great grandson and his family still live at the property and Camilla Baker has kindly shared some of her family’s memories involving the staircase that is such a pivotal part of her home.

‘We live at Owletts and are lucky to use this lovely staircase every day. It is very similar to the ‘new’ staircase at Restoration House in Rochester, which if I remember correctly was built in 1683. It spirals in the other direction. Owletts ceiling is dated 1684 and presumably the same craftsman journeyed from one job to the next. Restoration House was the inspiration for Dickens’ ‘Satis House’, home of Miss Havisham. So, we can imagine the jilted bride descending our staircase.’

It’s a memory of its remarkable plasterwork ceiling that stands out for Camilla, however, who adds:

‘During the Big Freeze of January 1987, Michael and I awoke at 5 am to hear water running outside our bedroom. Dashing out of the door, water was cascading through the plaster ceiling above us. Michael rushed up the spiral staircase and set the ladder to climb up into the attic to turn off the water, while I wrapped myself around in a dressing gown. Too late – as I followed him, in front of my very eyes there was a tremendous crash, as the heavily decorated ceiling fell, followed by a torrent of water.

I was terrified, panic struck. I paused and then followed Michael up the stairs, as an eerie silence fell. The dam was released, the flow of water from a burst pipe stemmed.

Recently we had been snowed in and no oil had been delivered, so there was no heating in the house, it was bitter. But we did have light, and our first thought was to find all the trays we had and pick up the damp plaster, rescuing the flowers, the heavy bunches of grapes, that luckily had not fallen on my head, and preserve them hoping modern day conservationists could piece the ceiling together again.

Luckily only part of the ceiling fell, and the rest was deemed safe, propped up in the meantime. Eighteen months later, with the knowledge of the original 1684 makers, conservationists returned having painstakingly pieced together the jigsaw of pieces and restored the ceiling. The patterning and dull white colour were similar to the original, and the joins invisible.’

As a final comment Camilla adds, ‘As a teenager during the great fixing up project, I remember the fun of having scaffolding to swing on for the months it was installed. It made a change from sliding down the bannister (always a bit painful because of the square endings!)

You can learn more about this special house by visiting https://www.nationaltrust.org.uk/owletts and I’m so grateful to Camilla for sharing her memories.

They’re a great reminder that no matter how old, or grand, a house may be it was, and in many cases still is, a home.